My memory now lets me down on the details of the next few days. I know that food was no problem and that we were at a different house each night, sleeping in out-buildings with the permission of the householder, on the understanding that we would move on in the morning. I cannot however remember the people or the places, although we must have called on Alec in passing and kept him informed of our movements. It was nearly a week later when we approached a tiny group of houses at Cerreta with the intention of finding Laurence Bains, having been told – by whom I wonder? – that he was living there. I had known Laurence quite well in prison camp where he had been in my barrack room. At the first house, a woman looked out of a first-floor window and I called up to her to ask if there was an Englishman called Lorenzo in the district. She replied in perfect, rather upper-class, English that indeed he lived at the next house. Laurence seemed to be on very good terms with the local people and suggested that a family about half a mile away, but still in the same parish of Cerreta, might offer some hospitality and promptly took us there to introduce us. On the way he told us that there had been an Englishman living there until recently but that he had gone off on a visit one day and had never returned.

Ernesto Lucarelli, for it was he, was very friendly and quite willing to help but said that there was room for only one of us. Hoop, whose Italian was still rather poor, was allowing me to do all the talking and the result was that it was I who it was agreed should stay. This was really rather selfish of me and I have had a bad conscience about it ever since. Did Hoop think badly about this, I wonder? – he certainly never reproached me, but then he had been a patient and an uncomplaining companion. In the meanwhile Alec had been putting pressure on his family to find someone who would provide a place and, fortunately this too was successful. Within a day or two, Hoop settled in with a family not much more than a mile distant and about mid-way between Alec and myself.

The Lucarelli farmhouse, and the farm itself, were both considerably smaller than that of the Cardarelli but they belonged to the family and not to a landlord. The house stood by the side of a good dirt road which went down to join the National road about a half-mile away. Of course this was a much more dangerous position than Picacchi. German trucks passed frequently on the main road and any one of them could have turned up our road and been at the house in a couple of minutes, although of course there was no obvious reason for them to do so. It was either very brave, or very foolhardy, of the Lucarelli to have me in the house, particularly as they themselves were completely in the clear with the authorities, neither of the two men being liable for military service. As I got to know them better, I realised that they understood the risks quite well.

All the farming techniques and equipment were the same as those with which I had by now become familiar. The land was if anything more awkward than at Picacchi, parts of it very steep indeed, running down into a wooded gully which must have been a torrent in the winter. The house and farmyard were set below a steep bank which went up to the verge of the road with a further bank continuing up on the other side of it, where they also owned some land. Further up still was a shared spring from which all the water had to be carried. All this seemed familiar enough, but there were some differences in behaviour, with the family being clearly conscious of their social position as the owners of their own land. It was not the thing for Assunta to work in the fields, for instance, although no doubt she did so at critical harvest times. There was still plenty for her to do around the house with two young children, the farmyard and animals to be looked after and water to be carried from the spring. Rosa, her mother-in-law, seemed older than her years and was not very active. Assunta was a small dark woman, rather thick-set and with a brisk no-nonsense manner who, I think, regarded herself as having married a little beneath her. Certainly she kept everyone up to the mark; prayers in the evening and no swearing.

Ernesto was a contrast to his wife; slender and fairly tall, blue eyes, fluffy brownish hair and with a diffident, softly-spoken manner. He was always polite and put forward his views or his requests with a nervous laugh which was almost an apology. The two little boys in turn took after their parents, Domenico very dark and Walter a blue-eyed blond, “like a German,” said Ernesto, and indeed he had been given this unusual German name which was always pronounced ‘Valdery’.

The unmarried Adolfo, although slightly simple, was always treated with respect by both sister-in-law and brother. He was an endearing character, like an intelligent child, very interested in what was going on in the world and always asking questions, often quite sensible ones, although he had a rather spluttering speech defect which made him difficult to follow. It was he who was most inconvenienced by my living there, as, from the first, he shared his bed with me. Rosa was a garrulous old lady who latched on to me as someone to talk to. I am not sure that she realised that I had any difficulty with the language or, if she did, it was certainly ignored as she chattered on in her strong dialect. An occasional nod was all that was required from me. Her favourite topics were tales from the lives of the Saints, of which she knew many, especially of Saint Nicholas of Tolentino a great favourite and a local hero, he having been born in the district. 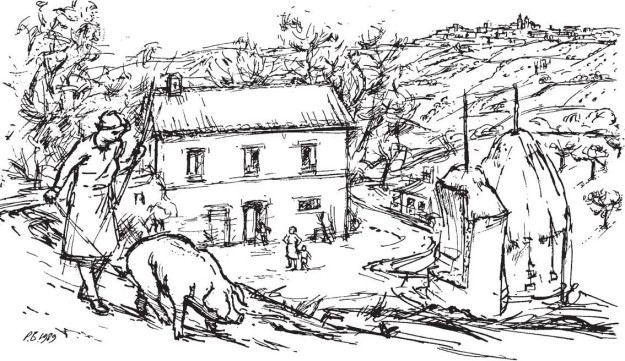 A visitor leaving the Lucarelli farm, with San Ginesio in the background

The farm overlooked the valley of the Fiastra and across it to San Ginesio on the other side. Parallel to the river, was a long straight section of the National road which, with its traffic, was clearly visible from near the house. By going up our road for a few hundred yards to the top of the hill, there was a view in the other direction to Gualdo. In the valley between, Hoop was now established in a household consisting of a widow and her son and daughter. They were a poor family and seem to have regarded Hoop mainly as a source of labour. In particular, the son, who was about nineteen and somewhat idle, was only too pleased to have a docile worker about the place. Hoop slept in an outbuilding of this small house which was part of a tiny hamlet, the name of which I cannot remember, but it was well known in the district as the place of an accident some years earlier when a man was ‘killed by the electric light’.

After we moved from the Cardarelli, Hoop and I certainly had no trouble in finding food and some shelter for the night. In fact during the whole of the time from leaving prison camp onwards I cannot remember being met with any hostility at any house at which we called. Conversation with a stranger followed a predictable pattern. We were first asked our nationality, then about our families, then about the war – did we think it a bad thing and what about Hitler, Mussolini, Stalin, Churchill and so on. What were our civilian jobs? Once on my replying ‘artist’ the questioner looked me up and down, taking in my generally scruffy and down-at-heel look. “Ah,” he said “In Italy it is different, here an artist is a real gentleman…”

We would also be told the troubles of their families, how they had a son away from home, perhaps a prisoner too in England or even in Australia. At this point a mother would weep a little and press more food on us, saying “Who knows whether someone may not be helping our poor boy now?” I could not help thinking that any escaped Italian prisoner in England might not be having such a good time of it.

After I moved in with the Lucarelli, Hoop settled in with his new family and life there is best left for him to describe:

“In comparison with the sleeping accommodation I now had, that at casa Cardarelli was savoy-like. My room companion was a sickly calf, my bed, maize stalks. At the time I arrived an older daughter from one of the cities was staying there. She, for the purpose of curing the calf of whatever ailment it suffered from went through an elaborate ritual putting five pinches of salt and seven spots of olive oil in the form of a cross into a bowl of water and recited a prayer – or would it be an incantation? Gently the potion was offered to the calf but it refused to drink. After several attempts equally lacking in success the gentle approach was abandoned, the calf noisily cursed, and the carefully made ‘Holy water’ was thrown over it.

“The family was poor, but clean, they farmed land running downhill to the valley of the Saline. I believe that they rented their land. Apart from tomatoes and maize I do not recall what crops were grown. They kept some six sheep and about a dozen ducks.

“……the young man of the household was not over industrious; most of the work done on the land was done by his mother, his teenage sister and myself. It was the only family I knew which would steal the produce from a neighbour’s land. I recall one occasion on which the son raided a neighbour’s tomato patch whilst mother and daughter placed themselves strategically so that they could shout a warning if the lad was in danger of being caught in the act.

“As compared with the necessarily frugal meals at the casa Cardarelli, the food was, here, very much lacking in both quantity and quality. The most frequent evening meal was bread and a salad largely consisting of dandelion leaves. As I’ve mentioned before our sleeping quarters at Picacchi were relatively palatial as compared with those I experienced in my second Italian home.

“….the activity of the neo-fascisti and the increased movement of the German troops led to increased anxiety among the local populace. On very many nights the calf had to do without its sleeping partner whilst I slept in an almost cave-like hole beneath a massive oak tree.

“One strange local custom I met was the business of the young women of the two nearby houses, with our teenager, collecting flowers one evening, stripping the petals from the heads and strewing them on a half cask of water. The cask was so placed that it would catch the first rays of the sun the next morning. I was told that the girls collected it and bathed themselves with it and as a result would be free of any illness for a year. Some of the water was saved for the men-folk with the same gain. I declined the offer – by this time the water stank of rotting vegetation – but succumbed as the result of tearful cajoling. I thought that this happening occurred on St John Baptist day, June 24th, but Paul’s dates suggest that it must have been earlier.”