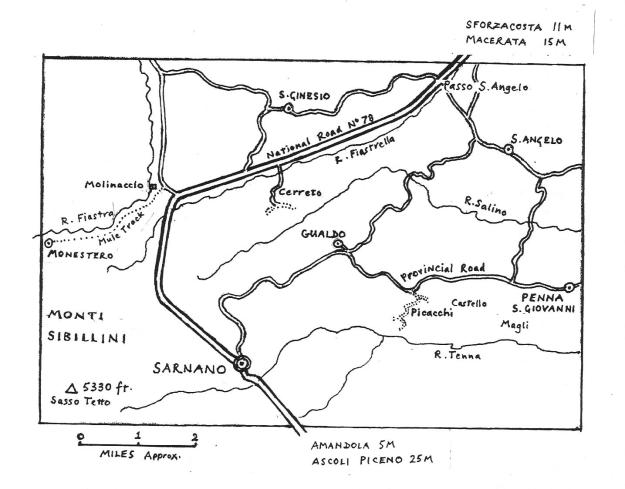 The tiny contrada of Picacchi could hardly be called even a hamlet, for even that would imply some sort of centre, of which there was none. The dozen or so houses were spaced out over a couple of square miles on the steep side of a valley which dropped down to the river Tenna. Above it, along the ridge, was the provincial road – connecting the little towns of Gualdo and Penna San Giovanni – from which a steep track wound and branched downwards to the scattered houses. It was impracticable for motor vehicles; I doubt if even a modern 4-wheel drive would have been able to negotiate the combination of sharp bends and uneven surface. Near the lower end, where the track forked, stood our ruined house; to the left the track continued down to the Cardarelli, where we had called a few days before; the right fork went to another house about the same distance away, which we were to learn was that of the Di Luca. There were no more houses lower down that side of the valley; tracks and footpaths continued through small steep fields and woods for another half mile or so, eventually petering out at the river. We were not of course yet aware of these geographical details, but it did seem to be a quiet and relatively safe area.

One of the problems in writing this after so many years is the inconsistency of memory; some incidents, often trivial, can be pictured clearly; others, which must have been at least as important, have faded. I cannot now recall our first meeting with the Di Luca family, although what does stick in my mind is a picture of one of the women – it must have been either Secondina or Maria – coming along the track towards the ruined house with a basket on her head, bringing us a meal. Then there is a blank, and next we seem to have been invited to help with the grape harvest, which was just beginning. Guiseppe spoke some English, but as he had not used it since before the first world war, when he was in America for a few years, it was not always understandable; however, it was not too difficult to sense what was required of us.

Harvesting the grapes was an important occasion, and the tradition was that neighbouring families sent representatives to help; these neighbours would, of course, be helped in their turn, As many men were still away on military service, there was a larger proportion of women available; so we helped the balance; the men with ladders, the women with baskets to carry on their heads. The vines were grown in the old way, supported by trees – maples I think – which had themselves been trained and shaped by pruning when young so that their branches spread outwards. They were spaced out in parallel lines through the fields, the rows wide enough apart for a pair of oxen to go between, allowing the cultivation of other crops. Pairs of oxen pulled the loads back to the house, where Palmira was waiting to notch a tally stick. The crop was to be divided with the landlord, and at the end of the tally the stick itself was split lengthwise to make a permanent record for both parties. The Di Luca share was taken to an outhouse attached to the main building and was tipped into a stone trough about eight feet square and three feet deep. There, at the end of each day, it was trampled underfoot and the juice was drained off. The heat made our work in the fields quite hard, but there was an agreeable novelty about everything, and this kept us amused, while we amused the Italians by our amazing ignorance of the simple procedures which they had known since infancy. A mid-day meal was brought down into the fields and there was a big supper back at the house. We got a slightly false impression of their normal standard of life; these were rather special meals as the Di Luca were on their mettle to entertain their neighbours and, no doubt, us.

The grape harvest continued for at least two weeks; we worked during the day and returned to the ruined house to sleep. One afternoon it rained, for the first time, and work had to be abandoned. As the stone trough had less than the usual quantity of grapes in it, these were left until the next day, which was a Sunday. The morning was also wet and Guiseppe decided that the grapes already picked ought now to be trampled as they might otherwise get mildew. Four men were needed to do this; Norman and I were provided with some tattered shorts, and together with Amilcare and Bastiano we climbed into the trough. The system was to link arms across the shoulders, forming a line across the width of the trough, and to trample our way backwards to the other side, then wheeling to cross again at right angles, and so on. To begin with, the grapes were above our knees and it was extremely hard work, with a great deal of suction and squelching at each movement. We had been doing this for some time when a faint rumble was heard, followed by an outburst of incomprehensible shouting and activity from all the Italians who rushed out of the out-building and the house into the yard. Amilcare and Bastiano had jumped out of the trough, leaving Norman and I looking at each other in astonishment; two bewildered Englishmen standing up to our knees in grapes without comprehending that we were also in the middle of an earthquake. Admittedly, the tremor turned out to have been quite a small one, but there was some damage in the district and at the Cardarelli a big crack had appeared in the stone wall of their cart-shed. Such tremors were not exactly common, but the locals were sufficiently aware of the danger for them to be prepared to rush out into the open air at the first sign or sound of movement. The more stable geology of the British Isles had not attuned us to this possibility; although we had a slight tremor when we were in prison camp, there too, it had all been over before we realised what had happened.

Norman and I treading grapes in the earthquake

After the grape harvest was over, we continued to work in the fields, mostly hoeing, and still slept in the ruined house. The provision of food and drink for five extra men was however going to put a strain on the Di Luca resources and they had been working out a little plan to spread the load. Would two of us go and work with the Cardarelli? asked Guiseppe, and of course we agreed. Hoop and I volunteered to go, taking it to mean a flexible arrangement with different people going on different days. Their plan however turned out to be something more permanent, as it involved our leaving the ruined house and living in with the families. When Hoop and I arrived at the Cardarelli next morning, they showed us the sleeping arrangements which had been made for us in the stable with the oxen. A section had been piled up with straw and provided with blankets, making it quite luxurious. Over at the Di Luca house, accommodation had also been made for Freddy, Norman and Alec. From then on – it was 20th October – we were integrated into our respective families.

Although their ways of life were so similar, there were marked differences in the character of the two neighbouring families and, although it seems fanciful, the English members – selected quite by chance – seemed in some ways to share their characteristics. Perhaps we just grew to resemble each other in the same way that pets and their owners are supposed to become alike.

Freddy remembers our first meeting with the Di Luca more clearly than I do. Both Secondina and Maria came across to the old ruined house where we had spent the night, bringing us baskets of food. They were followed later by Giuseppe who in broken English and part Italian offered to feed us if we would work for them.

At the time of the earthquake, Hoop’s recollection is that he was in the living room of the Di Luca with Alec, Freddy and members of the family when the latter all rushed outside leaving the English, unaware of the danger, to amble out later and thus achieve a reputation for nonchalant courage.