Vivenzio’s landlord – the padrone – was Filippo Pindi, who lived about half-way up the track towards the provincial road. He was not a big landowner, having only one other farm – that of the Felicetto family, our immediate neighbours. The Di Luca were under another of the Pindi family, a cousin who lived at the house next door to Filippo.

Filippo was a baby-faced man of about forty, with soft plump hands and the beginnings of a soft plump belly. Our peasants treated him – to his face – with respect, but there was no cap-touching and both he and his wife were spoken to in the familiar form and were called by their first names. He was a frequent visitor to the farm where he inspected all the main operations, particularly the harvesting of crops when he was due for a half share of the produce. Sometimes he stayed to lunch with his tenants, sitting at their table but at a place specially laid with a clean cloth. He did not eat their food however: his was brought down, carried in a basket on her head, by his maid­servant. 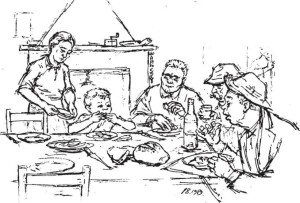 the Padrone lunches at the Cardarelli

Filippo did not pretend to more gentility in his table manners than the peasants themselves. With his hat firmly on his head, he kept his mouth well filled, parting his lips as he chewed so that chunks of bread and ham might be seen revolving within.

Unusually, Filippo himself ate no cheese and drank no wine, but in spite of this eccentricity he kept very good table at home and it was a great thing for us if we could find an excuse to visit him. Sometimes we went with Riccardo to pay a social call on a Sunday morning when the women were at Mass. The main object in this was to get as much food and drink as possible, especially drink. His wine was delicious, of various vintages and both red and white. Moreover it was ‘crudo’, unlike the peasant’s ‘cotto’ which was boiled in the making to mature it more quickly and which was really rather rough. Riccardo was at great pains to make sure we played our part in eating and drinking as much as we could get. He would roll his eyes and make elaborate gestures should we show signs of politely refusing anything that was offered. As soon as Filippo’s back was turned he would fill up our glasses and urge us to greater efforts, with much nudging and the expressive gesture of twisting his knuckles in his cheek to indicate the quality of the food. One Sunday morning, Freddy, having had several drinks too many, rushed across the dining room and spewed violently out of the window into the yard below. He was just in time to greet Filippo’s wife as she returned from church. Our stock went down, even though Freddy was at pains to explain that his indisposition was due to having previously eaten mushrooms.

Pia, the padrone’s wife, was a gentle creature, languid, melancholy and very conscious of being genteel. She was however, kind and helpful to us and had clothing and blankets sent down to assist our accommodation. Alas, she was sorry about the quality, but nowadays one could get nothing, nothing. This last phrase was Pia’s melancholy theme: “Non se trove niente, Paolo,” she said again and again, “niente, niente, niente.” Clothing? Boots? Non se trove; tobacco, coffee? Non se trove, niente, niente, niente. At each ‘nothing’ she opened her eyes wide and shook her head sadly. Nevertheless they did not do too badly themselves. Eggs, meat, ham, cheese and wine they had in plenty; even a few precious coffee beans, although for ordinary occasions they used roasted barley like everyone else.

Apart from such supervision as was necessary to ensure the collection of his half share of the tenants’ produce, Filippo did no work at all. Pia, who had a baby son, was helped in the house by a maid-servant. Altogether they had an easy, comfortable but unexciting life and, although they were living directly on the labour of about a score of peasants who worked very hard indeed, it was difficult to feel very much moral indignation about it. Nevertheless the spirit of the times \vas beginning to cause many peasants to question the justice of the ‘Mezzadria’ system – probably they always had. Even Vivenzio, who was fairly conservative, asked us if we thought that the Allies, when they came, would do away with it. We did not hold out much hope of this, however.

In my anecdote of a Sunday morning at the padrone’s, I wronged Freddy by attributing to him the incident of spewing out of the window into the yard below. This is another example of the odd way in which memory works, for I still have what I thought was a clear picture in my mind of this incident. This includes remembering where I was sitting and the lay-out of the room, the position of the window and what part of the yard was below. Moreover I can still see Freddy and hear his tone of voice apologising afterwards and blaming the mushrooms. Yet Hoop has confessed that really it was he who was the culprit, thus destroying my picture which should have him sitting next to me at the table watching Freddy’s discomforture. I now have an uneasy feeling that many other of my recollections might be similarly distorted.


[Footnote from AB – the Mezzadria system became illegal in 1982, though many felt it had much to recommend it in terms of keeping the land cultivated and providing security for the tenants, as well, of course, for the landowner. My father doesn’t mention that the landlord’s responsibility normally extended to buying the animals and the farming tools, so there was a sense of involvement from both sides, if a very unequal one. Today, many of the farms in the region are derelict, and the farmland overgrown.]